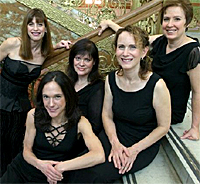 The season opens with “Orion Beginnings,” featuring a trio and a quartet Orion performed during its early seasons, along with a quintet commissioned for the Ensemble’s 10th anniversary: Bela Bartók’s Contrasts for Clarinet, Violin and Piano (1938); Sebastian Huydts’ Quintet for Clarinet, Violin, Viola, Cello and Piano, a 2002 Orion commission; and Robert Schumann’s Quartet in E-flat Major for Violin, Viola, Cello and Piano, Op. 47. Stephen Boe joins Orion as violist for this program. Performances take place October 10 (Ganz Hall/Chicago), 14 (Geneva) and 21 (Evanston).

After his triumphant first work for Orion during the 2011–12 season, Miguel de la Cerna returns to contribute an as-yet untitled 20th anniversary commission to “Folk Inspirations with a Mexican Flair.” Also on the program, which welcomes back violist Stephen Boe, are Arturo Márquez’s Zarabandeo for Clarinet and Piano; Manuel Ponce’s Piano Trio (Romantico); and Johannes Brahms’ Quartet in G Minor for Violin, Viola, Cello and Piano, Op. 25. Performances are May 5 (Geneva), May 8 (Ganz Hall/Chicago) and May 12 (Evanston).

Also during the season, Orion will appear on the broadcast series “Live from WFMT” November 26 and May 6 and in the Chicago Cultural Center’s Lunchbreak Series “Classical Mondays” October 15 and November 19. Orion also tours, performing in chamber music series across the country. Its most recent CD is Twilight of the Romantics.

Founded in 1992, the Orion Ensemble boasts a roster of five superb musicians—Kathryne Pirtle (clarinet), Florentina Ramniceanu (violin), Diana Schmück (piano), Judy Stone (cello) and Jennifer Marlas (viola)—who have performed with the Chicago Symphony Orchestra, National Symphony, Moscow Philharmonic, San Francisco Symphony, Chicago Lyric Opera Orchestra and Chicago’s Music of the Baroque orchestra, and at music festivals including Ravinia, Aspen, Mostly Mozart, Hollywood Bowl, Taos Chamber Music, Salzburg and Banff. The Chicago Tribune called Orion “one of Chicago’s most vibrant, versatile and distinctive ensembles,” and the Chicago Sun-Times said Orion is “what chamber music should be all about: Individual virtuosity melded into a group personality.” The Orion Ensemble received a Chamber Music America/ASCAP Award for Adventurous Programming for its critically acclaimed millennium celebration, “An Inside Look at Contemporary Music.” The Orion Ensemble is supported in part by grants from the MacArthur Fund for Arts and Culture, the Gaylord and Dorothy Donnelley Foundation and the Illinois Arts Council.

Groundbreaking Music and Health Symposium Hosted by Santa Fe Chamber Music Festival
“Music, the Brain, Medicine and Wellness: A Scientific Dialogue”: Scientists and musicians set to collaborate and explore effects of music on brain development, health, and the community.

This pioneering event will offer presentations by the world's leading figures in music therapy, psychological science, neuroscience and cognitive science. As part of the Festival’s 40th Anniversary season, the Symposium will include public events involving musicians and scientists as well as private sessions for the scientific and medical community. The Symposium will explore the effects of music on cognitive development, early childhood brain development, emotion, language and memory; the ability of music to advance the overall health and healing process of individuals facing cancer, developmental and cognitive disorders, or chronic health conditions; and the capacity of music to improve the general well-being of individuals and communities. Physicians attending the Symposium can also earn Continuing Medical Education credit.

The Symposium features an intensive cross-disciplinary exchange, defining the current state of the science and identifying the most important questions for future collaborative research and its clinical applications through presentations, demonstrations and concert performances. A number of internationally recognized artists will perform and participate in interactive panels including conductor Alan Gilbert (Music Director of the New York Philharmonic), members of the legendary former Guarneri String Quartet (who are reuniting for this Festival performance), composer Marc Neikrug (Artistic Director of the Santa Fe Chamber Music Festival) and pianist Inon Barnatan. As an interactive element of the conference, these artists and others will add a performance element to the mix, giving members of the medical community an opportunity to present their research in real-time with the aid of live performance during sessions.

The Symposium begins Friday, August 3, 2012 at 6:00 PM, with a Pre-Symposium Evening Concert open to the public at St. Francis Auditorium, New Mexico Museum of Art. Kamal R. Chémali, MD and pianist Prisca Benoit will present “When Music Sings, the Brain Listens and the Heart Modulates.”

The Adult Summer Choral Institute (July 17, 19, 24 and 26, 2012, on Tuesdays and Thursdays from 7-9:30 pm, Music Building of Montgomery College’s Rockville Campus) offers adult singers (college age and over) from around the area an opportunity to sing with members of the National Philharmonic Chorale under Dr. Engebretson in four intensive rehearsals over two weeks. The Adult Choral Institute will sing movements from Schubert’s Magnificat; Fauré’s Cantique de Jean Racine; Mendelssohn’s Verleih’ uns Frieden; and Bernstein’s Make Our Garden Grow. The week culminates in a free public concert with the High School/College Choral Institute at Montgomery College Cultural Arts Center in Silver Spring, MD on Friday, July 27, 2012 at 7:30 pm.