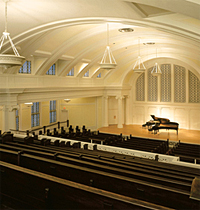 The Music Institute of Chicago, one of the U.S.'s largest and most respected community music schools, is pleased to announce achievements by its students in the 2011 Walgreens National Concerto Competition, sponsored by Midwest Young Artists, and the 2012 DePaul Concerto Festival.

Overall winners in the Walgreens National Concerto Competition will perform with the Midwest Young Artists Symphony Orchestra February 25 at Pick-Staiger Concert Hall in Evanston, Illinois, and receive a cash award of $500. The Senior Level Early Music winner, at the discretion of the director, will record with Ars Antigua, which performs music from the Renaissance through Classical eras on period instruments, and will be podcast from its website. Category winners, at the discretion of the director, will be selected to perform in the Winners Recital March 4 in Preston Bradley Hall at the Chicago Cultural Center. Music Institute students include:

Each year, traditional and Suzuki students in piano, violin, viola, cello, flute, and clarinet may audition for the DePaul Concerto Festival. Winners of the 2012 Festival will perform a movement of a concerto with the Oistrach Symphony Orchestra, under the direction of Mina Zikri, Sunday, January 22 at the DePaul Concert Hall, 800 W. Belden, Chicago. Music Institute students include:

Seattle Symphony and Morlot to give world premiere of John Luther Adams' Become Ocean in June, 2013 and perform it again at Carnegie Hall in May, 2014.

Four award-winning young pianists to perform the Rachmaninov Concertos with Ludovic Morlot
"Sonic Evolution" to include appearance by star Anna and the Laughing Dogs, plus world premieres inspired by Alice in Chains, Blue Scholars, and Yes.

"This is a wonderful validation of the great partnership between the Seattle Symphony and Ludovic Morlot," said Seattle Symphony Executive Director Simon Woods. "Nothing in the music world is more prized than an appearance at Carnegie Hall, and we are absolutely thrilled to be appearing there in 2014 with a fascinating program including a major new commission from Alaska-based composer John Luther Adams, that will be premiered in Seattle in June 2013."

About Spring for Music:
"Spring For Music" is a festival of six concerts in Carnegie Hall by North American orchestras performing creative, stimulating, and adventurous programs. In its inaugural season, Spring for Music was categorized by the press as "bold," "gripping," "vibrant," "inspired," "virtuosic," and "brilliant."  The New Yorker hailed it as "fresh at every turn," while The New York Times stated that Spring For Music gives "power to the listener." The festival is designed to reach broad music-loving audiences at affordable prices, sold through a unique marketing structure and with an artistic profile built around innovative and creative programs. The festival is designed to allow participating orchestras to showcase their artistic philosophies through distinctive programming in one of the world's most competitive musical environments. In pre-concert talks, each participating orchestra will describe how that night's program relates to its artistic philosophy. The festival becomes a musical laboratory with lively and attentive audiences that can foster greater innovation in each orchestra's home market.

About the Seattle Symphony:
The Seattle Symphony, now presenting its 109th season, has gained international prominence with more than 140 recordings, twelve GRAMMY nominations and two Emmys. The 2011–2012 season is the inaugural year for Music Director Ludovic Morlot, who was appointed to the position in 2010. The Seattle Symphony performs in one of the world's finest concert venues — the acoustically superb Benaroya Hall in downtown Seattle — and is recognized for its innovative programming, devotion to the classics, and extensive recording catalog. From September through July, the Symphony is heard live by more than 315,000 people. For more information on the Seattle Symphony, visit www.seattlesymphony.org.

Forough, joined by pianist Tatyana Stepanova, will perform Bach's Ciaccona from Partita No. 2 in D Minor for solo violin; Beethoven's Sonata for Piano and Violin in A Major, Op. 30, No. 1; and Franck's Sonata for Violin and Piano in A Major.

About Cyrus Forough:
Laureate of the Tchaikovsky International Violin Competition and Music Institute artist faculty member Cyrus Forough has performed in recital and with orchestras throughout four continents including command performances for international dignitaries. A prominent representative of the Franco-Belgian school of violin playing, he is a professor at Carnegie Mellon University and a visiting professor at the Eastman School of Music.