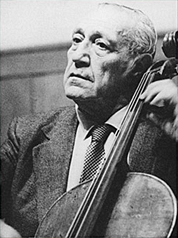 Underlining the University of Southern California's commitment to the inaugural Piatigorsky International Cello Festival, the university's "Visions and Voices" series has generously underwritten the Festival's opening concert as part of a comprehensive support for the goals and ideals of this celebratory event. The opening concert introduces the Festival Orchestra, led by conductor Hugh Wolff, and comprised of members of the Los Angeles Chamber Orchestra (LACO)--led by Margaret Batjer, concertmaster--together with some of the finest students from the USC Thornton School of Music and The Colburn School. Featured in the concert are seven distinguished international artists supported by some of the most esteemed talent in the Los Angeles metropolitan area. Visions and Voices aims to educate and inspire through interdisciplinary activities which cut across the breadth of study areas found at USC including theatrical productions, music and dance performances, film screenings, lectures and workshops. In anticipation of the Piatigorsky International Cello Festival, Ralph Kirshbaum, USC's Piatigorsky Endowed Chair in Cello, will present "Performance and the Art of Piatigorsky" as part of USC's "Visions and Voices" series on Wednesday, February 15 at Newman Hall on the USC campus. The presentation will feature a historical video, a talk on the life and career of Gregor Piatigorsky and the performance of an eclectic variety of musical selections by USC Thornton School of Music students.

Reaffirming USC and Greater Los Angeles as a hub for artistic edification, the scheduled master classes and workshops of the Festival will bring forty-five cellists (several being international prizewinners) from the most prominent conservatories and music schools in the world to work with some of today's most illustrious performers and pedagogues. Representing virtually every continent, fifteen students from across Europe, Japan, China, Australia, Africa and South America; sixteen students from US universities and conservatories including Juilliard, Curtis, Eastman, Yale, Indiana, Peabody and Cleveland ; and 14 students from Los Angeles institutions will come together to participate in the wealth of initiatives on offer at the Piatigorsky Festival. As a recent addition to the schedule, Sunday, March 18 brings internationally recognized artist Antonio Lysy to lead a free workshop for young, emerging, LA-based cellists between the ages of twelve and eighteen. Lysy will work with students to prepare for a morning concert at Colburn's Thayer Hall. Echoing the fusion of art and technology, auditions for this workshop will be submitted exclusively on YouTube. A select number of participants will be chosen to perform as part of the Festival's closing concert, joining over 100 cellists on stage at Walt Disney Concert Hall.

This coming February, Artistic Director Ralph Kirshbaum, and USC Thornton School students will engage with the community through an outreach program designed to raise awareness of the Festival and its namesake, Gregor Piatigorsky. Incorporating musical presentations and talks, Kirshbaum will appear at local schools, educating students about the cello and highlighting the Festival's mission.

Bringing together four prestigious Los Angeles organizations, the Piatigorsky International Cello Festival aims to highlight and bring awareness to the cello against the backdrop of one of the most culturally vibrant metropolitan areas in the United States. Combining the forces of the USC Thornton School of Music, the LA Philharmonic, The Colburn School, and the Los Angeles Chamber Orchestra, current and past members from all these organizations, together with colleagues from around the world, will participate in concerts, master classes and workshops in a ten-day celebration of the cello, its music, and its musicians.