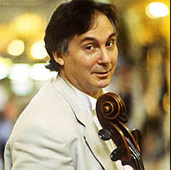 The USC Thornton School of Music and the L.A. Philharmonic in partnership with The Colburn School and the Los Angeles Chamber Orchestra bring together masters of the cello and young cellists from around the world for the inaugural Piatigorsky International Cello Festival, a unique celebration of the cello, its music and its musicians. Twenty-two outstanding artists, representing twelve countries, converge on Los Angeles for ten days, March 9 through 18, 2012, to share their artistry and teaching experience through orchestral concerts, chamber music performances, master classes and interactive events. The Festival is led by Artistic Director and USC Thornton School of Music Piatigorsky Chair, Ralph Kirshbaum, in honor of Gregor Piatigorsky , one of the legends of the cello whose tenure at USC heralded a period of incredible vibrancy in the cultural life of Los Angeles.

The opening concert features the American premiere of Thomas Demenga's Double Concerto performed by the composer and his brother Patrick, and the appearance of 2011 Tchaikovsky Competition Gold Medalist Narek Hakhnazaryan performing Saint-Saëns' Cello Concerto No. 1 with the Festival Orchestra. In addition to the American premiere of Demenga's Double Concerto, the Festival presents the American premiere of Miklós Perényi's Scherzo with Introduction, continuing the tradition of great cellist/composers exemplified by Piatigorsky. Other highlights include the unique opportunity to hear the six solo suites of Bach performed consecutively by six different cellists, and an evening of film and discussion celebrating the life and career of Gregor Piatigorsky enlivened by a panel that includes his grandson, Evan Drachman, and six of Piatigorsky's esteemed former students. Master Recital programs highlight an exciting diversity of works ranging from contemporary compositions to seldom performed masterpieces. Three of the Festival's concluding concerts, a Los Angeles Philharmonic subscription series conducted by Neeme Jä rvi, showcase outstanding soloists performing Dvorák, Shostakovich, and Tchaikovsky. The Festival's finale features over 100 cellists on the stage of Walt Disney Concert Hall for the West Coast premiere of Rapturedux by Christopher Rouse.

This ten day gathering of diverse musical values and points of view will strive to provide an inspirational showcase that will resonate throughout the world. The rich and varied kaleidoscope of master classes, recitals and concerts given by some of the greatest cellists of our time provides a unique opportunity to bring together the leading musical institutions of Los Angeles with representatives of the broader international music community.

Strathmore's AIR program cultivates local musical talent in the Washington, D.C. area. Emerging talents hone their craft through intense mentor relationships with established performers. Artists in Residence build their business acumen through professional development workshops, create school outreach programs and perfect their stage presence and expand their audiences during live performances. Each Artist in Residence is a featured performer in the Mansion at Strathmore for one month, in which they present salon-style concerts. The AIR experience culminates in the premiere of a new work commissioned by Strathmore, reflecting each musician's growth during the program. AIR graduates include Grammy nominated hip hop artist Christylz Bacon, celebrity jazz harmonicist Frédéric Yonnet, Saddle Creek recording artist Laura Burhenn and her band, the mynabirds, and ukulele chanteuse Victoria Vox.