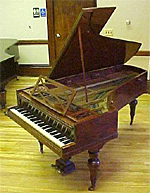 The folks at the Frederick Historic Piano Collection inform us that Chinese pianist Yuan Sheng, there last fall to record Chopin with the 1845 Pleyel piano, asked permission to get Edmund Michael Frederick's article "A Different Perspective on Piano History" from their Web site, translated into Chinese for publication in China.

Not only did the article appear in the February, 2011, issue of the Chinese magazine Piano Artistry, subtitled in English "Inspecting the Piano History from Another Point of View," a few pages later Yuan Cheng's own article, "Inspirations from the Early Piano," describes his experience as a pianist, rediscovering the works of various composers in the context of pianos in the Frederick collection, from the composers' own lifetimes. In July, when Yuan returns to the United States for the International Keyboard Institute and Festival in New York, he will record a video interview of Edmund Michael Frederick, with illustrative selections on various pianos, for a Chinese Public TV broadcast series premiering in the fall.

The staff of the Frederick Collection are looking forward eagerly to the eventual release of the two-disc CD album Yuan recorded there. He is one of the finest interpreters of Chopin in the world today. Their Web site has a rave review of Yuan's recent Chopin recital: http://www.frederickcollection.org/.

Spring Symphony at "Bach and Beyond," Vancouver Symphony Orchestra
The Vancouver Symphony's "Bach and Beyond" programs at the Chan Centre offer a niche series for a substantial audience that prefers music written before the Romantic and Modern eras. As such, the chamber orchestra programs inevitably raise a number of performance decisions, and become a laboratory for exploring style.

Certainly this year's season-ender featuring conductor/harpsichordist Kenneth Slowik had to wrestle with three distinct issues: how to present Bach on modern instruments; how to deal with a high Classical symphony; and, perhaps of greatest interest, how to present a work from the early Romantic era with chamber orchestra forces.

Slowik is artistic director of the Smithsonian Chamber Music Society and has directed the Baroque Performance Institute at Oberlin. No stranger to the VSO, he is deservedly building a following. His reading with just eight performers of Bach's Fifth Brandenburg Concerto, featuring VSO associate concertmaster Joan Blackman and principal flute Christie Reside, was stylish and elegant.

Haydn's Symphony #94 (The "Surprise") opted for humour and vitality. With about 40 players (almost exactly the same number Haydn used himself when the work was premiered in 1792), the winds/strings/percussion balance was altered significantly. Slowik's flexibility and understanding of Haydn's wit made for a decidedly amusing interpretation: It may well be the first time I've heard actual guffaws at the eponymous "surprise" in the second movement.

However, the real surprise of the program was Robert Schumann's Spring Symphony. It is conventional wisdom that Schuman's orchestral works have their challenges and flaws; many conductors don't give them the time of day. Slowik's approach was telling, and one feels that his years of lieder work with singers informed his extraordinarily poetic approach. He's certainly prepared to take risks—big ones— and, given some of the infelicities of Schumann's scoring, there were moments that courted disaster. But Slowik's sense of the emotional truth of the work, and his obvious joy in its exhilarating drive, coupled with a genuine feeling of spontaneity, made for a delightful performance that vindicated Schumann's idiosyncratic symphonic vision.

Harmonia Mundi distributes all releases in the United States and now also in the UK, Austria and Germany as part of a three-disc distribution arrangement for Europe. The next title, a collection of three Haydn symphonies conducted by music director Nicholas McGegan, is scheduled to be released on Tuesday, June 14. The third of the initial group of CD releases this year will be a studio recording of Vivaldi's beloved Four Seasons, as well as three other concerti, featuring principal violinist Elizabeth Blumenstock.

For a complete biography, visit www.philharmonia.org/about/history/.

Spring Sale at HDTT
The audiophile folks at HDTT (High Definition Tape Transfers) have announced a Spring Sale, offering 15% discounts on all of their music products. Although the sale does not include HQCD Blanks or Symposium Acoustic Products, it does include all of their CD transfers and downloads.  The sale ends June 5, 2011:  http://www.highdeftapetransfers.com/storefront.php.