Another name I'd never heard of. 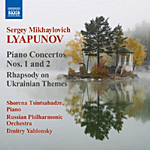 So, who is Sergey Mikhaylovich Lyapunov? He was a Russian composer (1859-1924) "strongly influenced," as the album jacket notes, "by Mily Balakirev, leader of the 'Mighty Handful'" of Russian nationalist composers who dominated Russian composition for a time. People probably know Lyapunov best for his two symphonies and for the three pieces recorded here: the two piano concertos and the Rhapsody on Ukrainian Themes.

The program begins with the Piano Concerto No. 1 in E flat minor, Op. 4 (1890), performed by Georgian pianist Shorena Tsintsabadze, with the familiar conductor and cellist Dmitry Yablonsky leading the Russian Philharmonic Orchestra (originally a recording ensemble made up from leading members of Russia's most-famous orchestras and now often a separate entity unto itself). The concerto is in a single, twenty-two-minute movement, although it follows a traditional arrangement of alternating sections. It's quite Romantic in nature, with big, boisterous segments and typically lyrical ones; yet it doesn't contain anything particularly remarkable or memorable. In other words, it's enjoyable while you're listening to it but just as easily forgotten.

The Piano Concerto No. 2 in E major, Op. 38 (1909) is a more formidable affair. It, too, is in a single movement, this time slightly shorter and more concise. It opens with a long, gently flowing theme, quite attractive and bucolic, which emphasizes Ms. Tsintsabadze's delicate virtuosity more than anything else on the disc. Following this opening section is a good deal more ornamentation by the soloist in segments that continuously transition from slow to fast to slow, with cadenzas galore. It's almost too much of a good thing, finally leading to hints of Tchaikovsky and Liszt. Although there is a lot to like in the work, it probably goes in too many different directions to connect with every listener.

The program concludes with the Rhapsody on Ukrainian Themes for piano and orchestra (1907), a piece in rondo form with a pleasant pastoral theme returning several times, interspersed with a few country dances. Frankly, I enjoyed this music with its exotic Rimsky-Korsakov overtones as much as anything on the album, not only for the endless tunes but for Ms. Tsintsabadze's sensitive playing and Maestro Yablonsky's alert direction.

Naxos recorded this 2010 release in Studio 5 of the Russian State TV and Radio Company, Moscow, in March of 2008. While the imagery lacks depth, it does spread out nicely between the speakers, and the slightly soft sonics are smooth and pleasant on the ear. The piano may be a tad too close, but transparency, dynamics, and frequency response are more than adequate, with some satisfying bass thumps along the way.